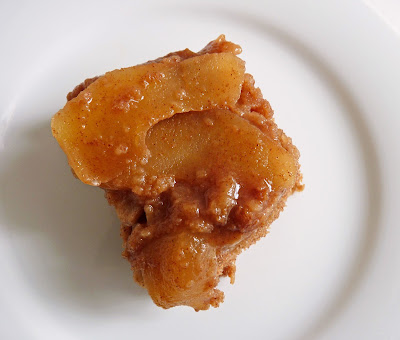 Winter arrived yesterday in the form of a nice downpour with more expected to follow. Time to bake some old fashioned comfort food, which at this time of year usually means apples and spice in the form of a spoon dessert.

This is one of those crazy self-saucing cakes that sort of defies logic. There’s a layer of fruit on the bottom, a layer of cake batter and then a layer of liquid poured on top. Somehow, this strange arrangement magically bakes into a cake with a nice sauce that simmers the fruit. Fairly odd, but just the thing to enhance a rainy day.

Brown sugar, cinnamon and nutmeg add to the warmth of the dish in each layer. And since I’m a fiend for oatmeal, I tossed just a smidgeon into the cake mix for more texture and taste. Apple cider that’s been simmered with more cinnamon and brown sugar gets poured over the whole thing. Just 30 minutes later you have a soothing warm dessert. And a kitchen full of the very best aromas of winter. 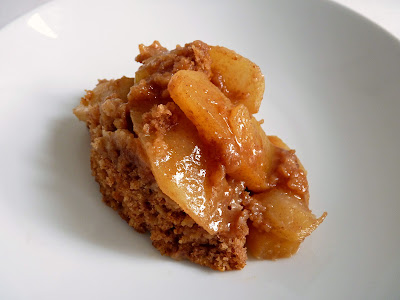 Bench notes:
- I used Gala apples, which aren’t very sweet. Fujis or Granny Smith would also be good. Adjust for sugar.
- If you’re not a fan of oatmeal, just delete it. I’d be tempted to add ground pecans.
- Have the cider, brown sugar and cinnamon ready in a saucepan. Once the cake batter is mixed, work quickly to heat the cider mixture, pour it on and get it in the oven.
- Use unsweetened apple cider.
- This is a great dessert all by itself but of course lends well to serving with ice cream or a dollop of fresh cream. 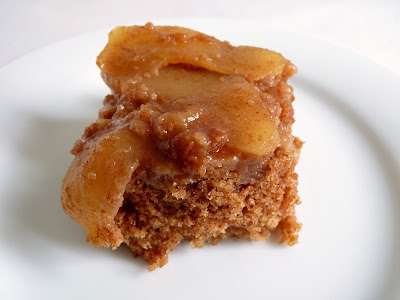 Preheat the oven to 350 degrees. Lightly grease the sides of an 8” x 8” baking dish.

Peel and core apples. Cut into thin slices and place in a bowl. Toss with lemon juice, 1 tablespoon of sugar and a pinch of cinnamon. Set aside.

In another bowl, whisk together the milk, melted butter, vanilla and egg until thoroughly blended. Using a fork, stir the flour mixture into the liquid until just incorporated and there are no dry streaks.

Toss the apples and spread them in an even layer in the prepared pan. Carefully spread the cake batter evenly on top of the apples, fully extending the batter to the edges and corners of the pan.

Combine cider, 1/4 cup brown sugar and 1/2 teaspoon cinnamon and bring it to a boil, stirring to dissolve. Remove from heat and pour over the cake batter. Do not stir or attempt to mix the liquid into the batter in any way.

Bake for about 30 minutes or until a toothpick comes out with a few moist crumbs. Place the cake on a wire rack for just a few minutes to rest. Serve warm. 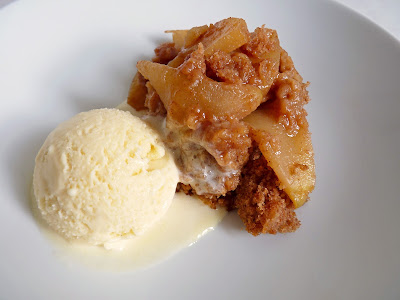 Posted by pastry studio at 6:13 AM

Beautiful. Exactly my idea of food heaven. Your photo perfectly captures the wonderful flavour combinations of this dessert, I can practically taste it! (I wish I could actually taste it!)

There's nothing like an old-fashioned dessert when the January cold sets in. I did lemon pudding cake yesterday, but this looks like a good addition to my weekend baking plans. Thanks again for a lovely post full of good information.

You are a siren. I guess nobody told you that January is for what Nigella Lawson calls Temple Food, the food we eat after we have over-indulged, which seems to happen to everyone from Thanksgiving through Boxing Day (I do so love an extra holiday).

I earmarked the Chocolate Banana Upside Down Cake for February, but this dessert is not be resisted for more than a few days. Perhaps the Giants will win on this coming Sunday, and it will be a good thing to have a celebratory dinner in the works.

This looks amazing! And what do you know, I have all the ingredients in my kitchen! Don't you just love that?

This is gorgeous, and just my kind of thing, and I have all the ingredients, too. Doesn't that make it a perfect recipe? I have so many of yours bookmarked ...

it looks really moist! the combination of ingredients is simply perfect

Good grief this looks good! I had to stop myself from licking my computer screen.

I love that this doesn't require a stand mixer. Pure, unadulterated apple cider is one of my favorite liquids to cook and bake with. This is perfection, and I doubt I could pass on a rich scoop of vanilla ice cream to go with this. Lovely.

Helloooo, everyone! So pleased that you find these kinds of simple, rustic desserts just the thing this time of year. There's nothing like apples and spice when it's chilly outdoors. And it's always nice to have everything you need right in your pantry. I hope you enjoy the fruits of your labor. Cheers and stay warm!

I've never heard of a sauce cake before - does it come out sauce-y, or is that just while it's baking? Seems like it would be stupendous with a nice dollop of vanilla ice cream on top!

Hello, Union Street Eats. The cup of apple cider poured on top somehow manages to filter through the cake batter as it bakes and a sauce forms at the bottom that helps cook the fruit. Weird, I know!!

ha, well... i made this one too last weekend.
i wanted to put my xmas juicer to work and made cider-- sort of-- with mostly pink lady and a granny smith. sierra beauty on the bottom of the pan. like a reflex, i added cardamom to the batter.
divided this batch too into smaller rounds to play with the apples-- both slices and squarish pieces. i like the slices better.
thankfully, smaller rounds are the perfect size for sharing with neighbors.

also been experimenting with raw cream lately-- drizzled a tablespoon over the slices to serve. tasty stuff.
thanks for another good one here.

Thanks for your tasty recipe. It's mouth-watering.

How do I print this recipe so I can use it in my kitchen? I can't carry the computer screen in there with me! LOL Thanks for your assistance.

DTBerquist, I think the easiest way is to cut and paste the recipe onto a Word document and print that.

i loved this. Thanks