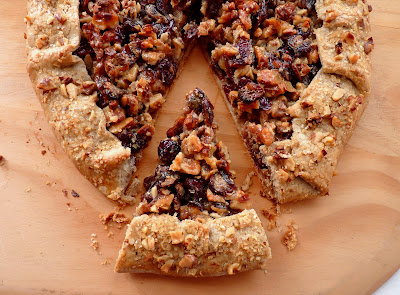 A crostata is the Italian version of the French galette, which is a free form version of American pie. It’s a beautiful way to present a dessert that is both casual and easy to produce and a snap to serve.

This crostata comes from Marcel Desaulniers by way of Rose Levy Berenbaum in her Pie and Pastry Bible. It’s chock full of toasted walnuts and a mixture of dried cranberries that are bathed in a creamy sugar mixture with a dash of cinnamon. It’s a very hearty winter pastry that isn’t heavy or too rich. It’s only slightly sweet to showcase the tartness of the cranberries and the rich flavor of the toasted nuts. I think it's perfect for our winter season. 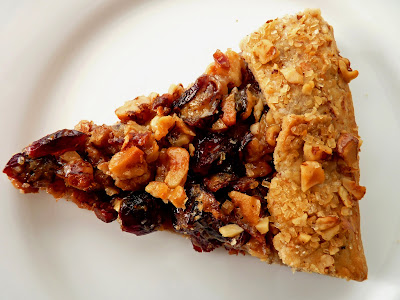 Bench notes:
- You’ll need about 8 oz of walnuts for both the pastry and the filling. Lightly toast the walnuts at 350 degrees for about 8 - 10 minutes or until they just start to turn golden and give off a light toasty aroma.
- The filling will appear a bit liquid but as it chills the cream and sugar will be absorbed by the nuts and dried cranberries.
- You can substitute dried cherries for the cranberries. Berenbaum advises against substituting almonds (too hard) or pistachios (too soft) for the walnuts.
- The recipe calls for 1/4 cup of white sugar for the filling but I used 2 T white and 2 T packed dark brown.
- The pastry dough has less sugar and less butter to make it less fragile and easier to handle. The walnuts in the pastry dough should be finely ground with the flour to make handing and rolling the dough easy.
- Desaulniers calls for up to 1/4 C extra flour to roll out the dough. I didn’t need to use nearly that much and I found the dough to be very easy to work with after it was chilled. Just be sure to use enough so the dough isn’t sticking as you roll it out and use a pastry brush to dust off any excess flour remaining on the surface of the pastry. 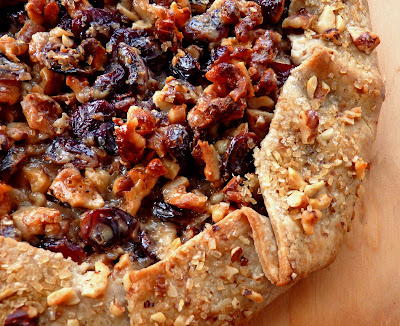 For the filling, coarsely chop 1 1/2 cups of walnuts.

Bring cream & sugar just to a boil over medium heat, stirring until the sugar is dissolved. Lower heat and simmer for 6-8 minutes, stirring occasionally until the mixture becomes slightly thickened. Remove pan from heat and add dried cranberries, walnuts and cinnamon and combine thoroughly.

Line a 9" pie pan with plastic wrap. Transfer the filling to the pie pan, spreading it to an even layer across the bottom of the pan. Refrigerate for at least 2 hours. It can be chilled up to 24 hours.

For the pastry, subtract 2 tablespoons of walnuts from the 1/2 cup. Chop the 2 tablespoons into small pieces, combine with 1 tablespoon of sugar and set aside as a garnish to sprinkle on top of the formed pastry before baking.

Place the flour, 1 teaspoon of sugar, salt and remaining walnuts in the bowl of a food processor. Process until the nuts are finely ground into the flour mixture. Add the cold butter pieces and pulse until the texture is like coarse meal with a few larger pieces of butter. Whisk together egg yolk & ice water. Add to dough mixture and pulse until dough begins to come together in clumps and there are no dry flour patches.

Turn the dough out onto a piece of plastic, bring it all together and form into a disc. Wrap tightly and chill for 30 minutes or until firm enough to roll.

When ready to assemble the crostata, place the dough on a piece of parchment paper lightly dusted with flour. Roll into a 14" circle, using a light dusting of flour as you go to prevent sticking. Place rolled dough and the parchment paper onto a baking sheet or pizza pan. Invert the chilled filling on the dough, discard the plastic wrap and fold the dough over the filling. Refrigerate for at least 10 minutes or until your oven is ready.

Preheat the oven to 375 degrees.

For the egg wash, combine the egg, water and salt. Brush the top of the pastry lightly with egg wash and sprinkle with the 2 tablespoons of chopped walnuts and sugar.

Bake for about 30 minutes or until the pastry is golden brown and the filling is bubbling. Cool for at least 15 minutes on a wire rack. 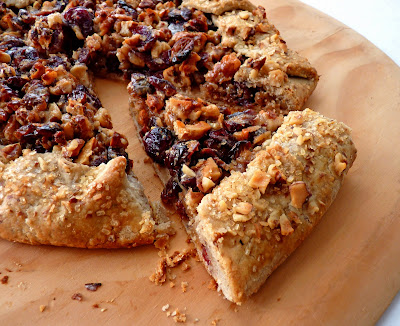 Posted by pastry studio at 5:42 AM

Email ThisBlogThis!Share to TwitterShare to FacebookShare to Pinterest
Labels: tarts and galettes

The cranberry walnut filling in this tart looks fantastic!

That crust looks amazing! Thanks for the recipe.

This is a beautiful dessert full of inviting flavours and textures. Nice recipe!

Are you assuming that the dried cranberries are sweetened?

Anonymous, the recipe as written by either Desaulniers or Berenbaum doesn't indicate. I think most commercial dried cranberries are sweetened. I used Trader Joe's and I believe they are sweetened. So if you have unsweetened, you may want to increase the sugar by a tablespoon or so.

Oh! This looks amazing! Can't wait to try it!

Haven't been able to visit lately, so just did a marathon catching up your last several posts. What a virtual feast -- beautiful and sounding so delicious!

that looks amazing, i love how nuts are on the crust too, very unexpected!
http://alwayswithbutter.blogspot.com/

I made this yesterday and have to say, it was really fantastic! The dough was really easy to work with and the whole thing came together perfectly.
For some reason, the filling didn't absorb as much liquid as I'd hoped it would, but it wasn't a big deal. It still looked and tasted wonderful!

I did want to point out, though, that there's a typo in the recipe. The measurements for the walnuts are accurate, but the weight equivalents are reversed. It should be 6 oz for the filling, and 2 oz for the pastry.

Thanks for posting this! Great dessert, even in Springtime!!

saturday mike, I swear you are the best editor. Sorry about the typo there. I've fixed the text.

I also really love this crostata's nutty chewiness and delicious flavor. Although it screams winter, I agree it would be totally delicious anytime, anywhere. I really expected the dough to be difficult but it wasn't at all. The reduction in butter and sugar really make a difference. Enjoy!