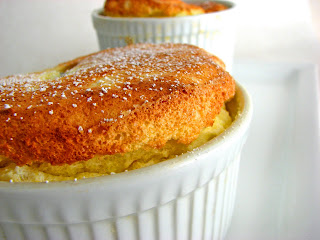 I once worked on a food series for public television, which was an incredibly amazing and exciting opportunity. I learned so much about what happens behind the scenes and how much work actually goes into producing a food show. We shot 26 half-hour episodes in less than 3 weeks and it was really pretty crazy and stressful but also a ton of fun. I could write a book about all that happened.

My job as a culinary production assistant was to do a final plating of all the ingredients for the set. The food stylists would style the final shot of each finished dish. You can’t imagine how many people are involved in this kind of production. It is a very intensive team effort.

Because filming and studio rental are so expensive, time is always of the essence. Behind the scenes we had to be sure to have three back-ups of all the ingredients for each course in case something went wrong. Each show had at least 3 courses, each with many ingredients, so I'm sure you can imagine just how very complex this could get. Everything had to be staged just so in a particular sequence, which sometimes changed from the script of the night before. When the producer called for an item, it had to be perfectly ready for the cameras in all the various stages of the preparation process. Which brings me to soufflés.

This recipe for Cornmeal Berry Soufflé is simple and delicious. But trying to photograph and capture its lovely soufflé light-as-air volume was certainly impossible. To begin, I had all the ingredients prepped but the sun kept disappearing. And since I shoot in natural light, I had to be sure the sun would cooperate at just the precise moment that the soufflés came out of the oven. That in itself was pretty hilarious. And unlike a television studio, I didn’t have a coterie of assistants and several back-up preparations to get me through the shoot. Then there was the steam emanating from the soufflés. I'd really love to see how this is done by editorial stylists. I surely missed the best shot, so forgive my compromised photos of this delightful dessert.

The base for this dessert is an orange infused cornmeal mixture. The small amount of cornmeal lends a little bit of texture to the creamy soufflé. The orange is a nice accent for both the cornmeal and the berries. The texture is soft, the flavors subtle and really delicious. It makes for a light and luscious dessert. But make sure you eat them straight out of the oven. Their deliciousness depends on them being warm and airy. No time for second takes! 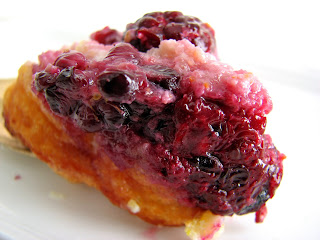 Bench notes:
- I added a few things to the recipe to brighten the flavor: a pinch of salt, a couple drops of vanilla extract and a splash of Grand Marnier. The recipe also called for them to be baked in a bain marie, but I don’t find that necessary.
- The recipe called for raspberries, but I had fresh blackberries so I went with them instead. I think this dish would also be fierce with honeyed fresh figs, juicy fresh cherries, peaches, apricots, even spiced dates.
- Soufflés are a good way use up egg whites. Each egg white weighs an ounce, so it’s easy to measure out if you have a scale. 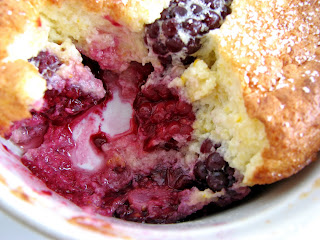 softened butter and sugar to prepare the ramekins

Combine the milk and orange zest and bring to a simmer. Remove from heat, cover and let steep for about 30 minutes.

Slather four 1-cup ramekins with butter and dust them lightly with sugar.

Return the milk to a simmer with the 2 tablespoons of sugar and a pinch of salt. Slowly drizzle in the cornmeal in a thin stream to avoid clumping. Add the orange juice, vanilla and Grand Marnier and simmer over low heat, whisking constantly, until the mixture is soft and creamy, about 4 or 5 minutes. Transfer the cornmeal mixture to a bowl and cool slightly.

Beat the egg whites until foamy and opaque. Slowly add the 2 tablespoons of sugar and keep beating until soft peaks form. Fold about a third of the beaten whites into the cornmeal mixture. Gently fold in the remaining egg whites. Fold in the berries just before the mixture is thoroughly combined.

Gently spoon the mixture into the four prepared ramekins.
Bake for about 24 minutes or until the soufflés have risen and are golden but still soft in the center. Dust with powdered sugar and serve immediately. 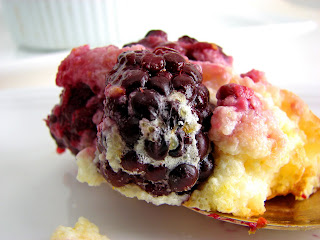 Posted by pastry studio at 6:15 AM

Your photo's are still beautiful despite your lack of assistants;) I've been a little obsessed with cornmeal lately since I ordered some from Anson Mill's. I can't wait to try this. Cornmeal and blackberries are meant for each other.

That looks delicious! I might have to try this once I can get fresh local berries up here!

what a great job that must have been! i dream about that. the texture of the pudding like souffle and the cornmeal has to be terrific!

You just brought back tons of memories. I spent 3 1/2 weeks filming a crafting tv show and the experience sounds very very similar. Bookworthy for sure!
This souffle looks amazing! I love the idea of cornmeal in it.

What a wonderful opportunity, indeed!! Thank you for sharing!!


Oh my, that soufflé - perfection!!

I can't even imagine what it takes to photograph food for a tv show, I have a heck of a time just taking pictures of what I bake! This souffle looks wonderful, I've never baked with cornmeal either but have some and will try this, thanks!

Cornmeal and berries! Sounds fantastic and what great looking souffles, despite your trouble photographing them.

Ooh this is a great idea for using some of the cornmeal I bought for another recipe. I have a huge bag that needs to go to use.

And to second and third what others have been saying, the photos still look lovely.

What beautiful souffles, I love the colors!

That sounded like a great opportunity!
This is the kind of cake we love to eat on Sunday evenings...cozy and delicious!