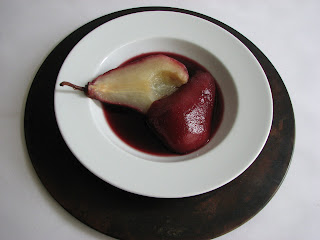 The annual promotion of Beaujolais Nouveau, which occurs on the third Thursday in November, is a longstanding French ritual to celebrate the end of the first harvest of the Gamay Noir grape. Beaujolais Nouveau is the product of a brief whole grape fermentation, which produces fruitiness without extracting the bitter tannins from the grape skins. The wine is ready for consumption in just 6-8 weeks.

French wine merchant Georges Duboeuf is responsible for creating this promotional event that begins with a rush to deliver the first bottles of the new vintage to Paris. By the 1970's it became a national event and in successive decades spread to the rest of Europe, then North America and eventually to Asia. In the United States, it coincides with the Thanksgiving holiday. The wine is often served chilled and is considered a very lightweight drink marketed for immediate consumption rather than aging.

As the celebration rolls out this weekend, I am reminded of how good a simple dessert of wine poached pears can be. Perfect at the end of a heavy fall meal, the following recipe is adapted from the prolific Patricia Wells, the sole American ever to become a restaurant critic in France. The recipe was brought to my attention on Chowhound’s Home Cooking message board. What caught my eye was the description, which revealed that the poster couldn’t stop eating these pears and wound up licking her bowl. So I was inspired by such unbridled glee to try this recipe and sure enough, this sauce will leave you helpless. Lovely pears poached to perfection in a sauce that blends a wonderful fruitiness with a subtle sweetness and haunting blend of spice. You, too, will surrender before too long. 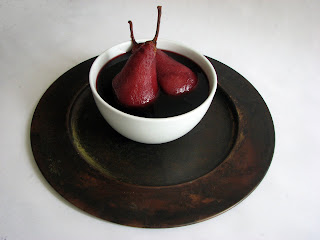 Bench notes:
- Use an ordinary vegetable peeler to peel the pears, following the vertical contours of the fruit and being careful not to bruise as the red wine tends to emphasize the surface during the poaching process.
- If the pears are not completely submerged in the wine, turn them as necessary every 10 minutes to ensure even saturation and coloration.
- I used a good quality zinfandel with terrific results.
- I highly recommend Malabar peppercorns, native to the Malabar Coast of India and the island of Sri Lanka and the best of the mass-produced variety.
- Crème de cassis is a wonderful liqueur made from black currants in the Burgundy region of France. I used a bottle from Chermette. The liqueur lends a bit of sweetness and a rich depth to the sauce. Crème de Casis was originally produced by 16th century monks as a cure for disease and wretchedness. Incidentally, it is the favorite drink of Agatha Christie’s fictional detective, Hercule Poirot. 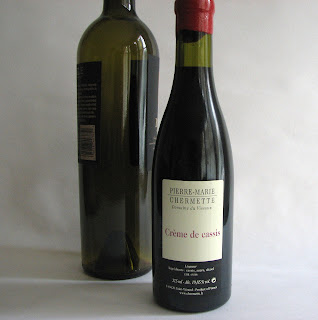 Carefully peel pears. Combine remaining ingredients in a saucepan and bring to a simmer. Submerge pears and simmer on low heat for about 30 minutes. If the liquid doesn't totally cover the pears, turn them every 10 minutes. Cool and refrigerate 24 hours. Serve at room temperature. 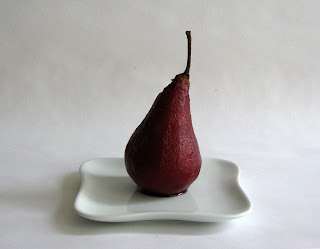 Posted by pastry studio at 7:29 AM

Email ThisBlogThis!Share to TwitterShare to FacebookShare to Pinterest
Labels: from the wine cellar, fruit, gluten free

Wow! This looks so good. Poached pears are one of those desserts I've always admired but never made. I HAVE to try it now!

You can practically see that upright pear grinning in pride!

That looks yummy, and it's easy enough even for me to do.