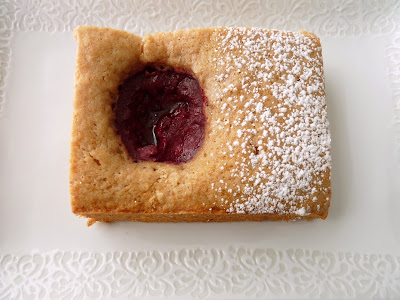 Calling all plum people!  Now that the fall is gearing up and most of the peaches and nectarines have just about deserted us for another year, it’s time to load up with fresh plums.   I especially like the tart flavor of black plums with their deep dark purple skins and purple interior.  This Cinnamon Plum Cake makes good use of them in combination with some delicious aromatic spice.

I’ve always been a spice fiend.  As a kid, my first introduction to spice was cinnamon, a spice that actually dates back to antiquity when it was highly prized and a treasured offering to the gods.  Sri Lanka is the world’s largest producer but the variety found most commonly in the U.S. is Indonesian cassia.  If you love cinnamon and haven’t yet discovered Vietnamese cinnamon, I encourage you to give it a try.  Although Viet Nam is a minor producer, its cinnamon has become very popular among bakers.  It has a darker and stronger sweet spicy heat and the oil content is much higher.  The aroma is spellbinding.

Contrary to popular belief, allspice isn’t a blend of a lot of different spices. It’s actually the sun dried unripened berry of the Pimenta dioica plant.  It's sometimes referred to as Jamaica Pepper because early spice explorers striking out to the New World believed they had discovered the black pepper they coveted.  The term "allspice" is likely due to the fact that its aroma and flavor strongly suggest the flavors of cinnamon, nutmeg, black pepper and cloves.  Allspice does contain a trace of eugenol, the essential oil that gives cloves their distinctive flavor.  I often use allspice as a backnote to amplify other spices, especially cinnamon.  It’s also a key ingredient in Caribbean jerk dishes.

This is another one of my favorite kind of cakes that features seasonal fruit.  It’s got a very soft and tender crumb and it’s scented with a nice big dose of cinnamon and a dash of allspice.  The plums sit on top of the batter and the cake rises to surround and embrace them.  It’s seriously delicious and will most likely please the plum and spice fans at your table. 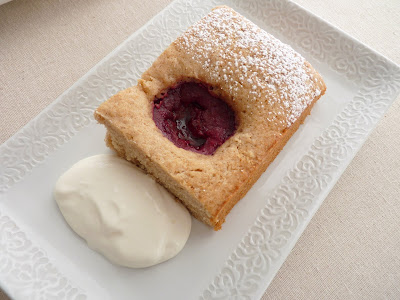 Bench notes:
- My plums were a bit large.  Use 4 smaller plums to get 8 smaller slices.
- The cake is great served plain.  I garnished it with slightly sweetened crème fraiche.  If you don’t want to make your own crème fraiche, I recommend Belwether Farms. Whipped cream or ice cream works, too!
- Vietnamese cinnamon is much more expensive but can be found at a better rate in bulk groceries, where you can buy in preferred quantities.
- I'm a big proponent of parchment paper.  It's one of my can't-live-without pastry items.  You can find sheets (preferable to rolls, which are a battle to use) for bulk purchase at King Arthur's. 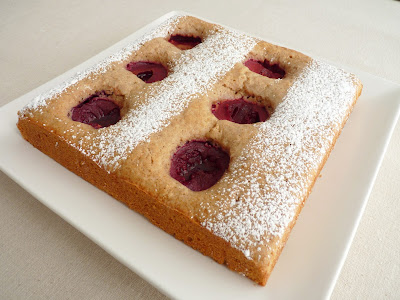 Cream butter and sugar until light and fluffy, about 4 minutes, scraping down the sides of the bowl as needed.  Add orange zest and vanilla and blend.

Beat in eggs one at a time, mixing thoroughly after each addition.
Add a third of the flour mixture alternately with the milk, beginning and ending with the flour.  Scrape down bowl to be sure everything is incorporated.  Pour the batter in the prepared pan and spread evenly.

Cut the plums in half and remove the pit.  Press the halves just a bit into the cake batter, leaving about half of them exposed above the batter.  Combine 1 1/2 tablespoons sugar with a good pinch of cinnamon and sprinkle directly onto the top of the plum halves.

Bake until a tester inserted in the center of the cake comes out clean, about 27 - 28 minutes.  Place on a wire rack to cool.  Run a thin knife along the edges of the cake and gently lift it out of the pan using the paper overhang to assist.  Remove the parchment and dust the cake with powdered sugar. 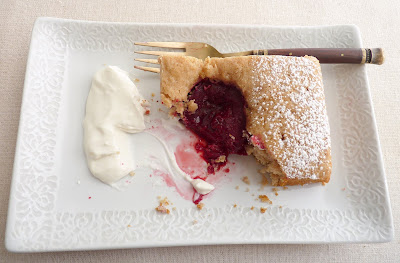 Posted by pastry studio at 8:42 AM

Email ThisBlogThis!Share to TwitterShare to FacebookShare to Pinterest
Labels: cake

I'm a plum person, and I came running when I saw the title of this post. Plums and cake are a match made in heaven, and I love the surprise of the allspice.

Glad to hear from another plum aficionado. I wait each year for plums and usually make a tart or galette. This year I thought it would be a good idea to come up with a delicious cake. Cinnamon plays very nicely with plums so I think this cake really hits the spot.