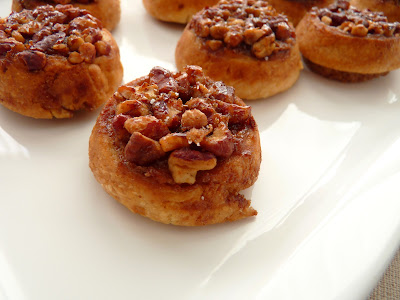 It's early in the morning and the aroma of fresh coffee wafting through the house makes you realize you'd like a nice little something to go with that first luscious cup of hot java.  Maybe you have some new coffee beans you've ground and you're excited about a new brew.  Or maybe you'd just like something to take the edge off an early rise.  Something that is so easy there can be no resistance to the idea of making them on a whim as you greet the coming of a new day.

There's something about pecans and sticky buttery brown sugar concoctions that make just about everyone sit up and take notice.  The smell of cinnamon and gooey sugar gets all our neurons firing.  These little two-bite pastries capture a lot of that flavor and chewy goodness with very little effort on any given day of the week.

Instead of a yeast dough or pie dough, this is a very quick preparation similar to cream scones.  Once you slather the rectangle of dough with butter, a sprinkle of salt, cinnamon and brown sugar, you roll it up and refrigerate it so it firms up enough to slice easily.  Bake them and in just 12 - 15 minutes you suddenly have a snack plate full of delicious pastries that would also be great for a brunch or as a bite-sized sweet on a party tray.  And while these obviously don't have the richness of full-blown cinnamon rolls or sticky buns, their lightness and modesty provide their own sort of benefit.  This enticing little bite with that freshly brewed cup of coffee will no doubt send you happily on your way. 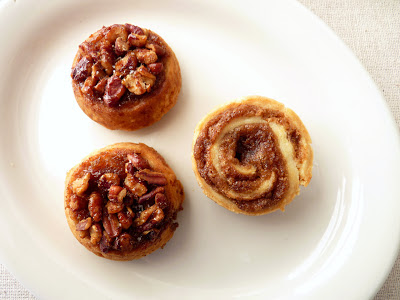 Bench notes:
- The recipe calls for pecan halves placed in the muffin wells but I chopped them coarsely for a different look and bite.
- I added some orange zest on top of the brown sugar layer before rolling up the dough.  I'd probably also add a pinch more cinnamon the next time or maybe a dot of allspice because I'm a slave to spices.
- To portion the pieces equally, the easiest thing to do is to cut the roll of dough in half, then cut each portion in half, then cut each portion into 6 pieces.
- You really do want to release the pastries from the pan straight out of the oven or the sugar hardens on the bottom and they will stick.  Just flip the pan over and they pop right out.
- I forgot to sprinkle the salt on top of the butter so I sprinkled the pastries after I baked them and turned them out.  In any case, salt really does add to the deliciousness so be sure to use it. 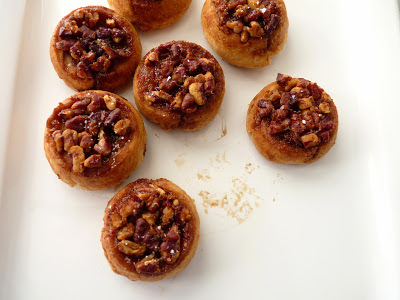 Grease a mini-muffin pan or pans with butter.  Place a pecan half in each muffin cup, top side down.

Whisk the flour, baking powder and salt together.  Make a well in the center and pour the cream into the well.  Stir together just until the dry ingredients are completely moistened and a soft dough forms.  The dough won't look perfectly smooth.  Set aside to let it rest for 2 - 3 minutes so the flour absorbs all the cream.

Mix the brown sugar and cinnamon together.

Place the dough on a lightly floured piece of parchment or a work surface.  Roll the dough out to a rectangle about 12" x 7" and 1/4" thick, lightly dusting with flour as necessary.  Using a small offset spatula or your fingertips, spread the dough with the soft butter.  Sprinkle with a pinch of salt.  Sprinkle the brown sugar and cinnamon, leaving a 1/4" border.

Starting at one of the shorter ends, roll the dough up tightly and press the seam to seal.  Place the roll seam side down and gently stretch it to lengthen it slightly to about 12".  Refrigerate for at least 30 minutes.

Cut the roll of dough crosswise into 24 equal pieces.  Place each piece in a muffin cup, cut side up.  Bake until browned, 12 - 15 minutes, rotating the pan(s) from front to back halfway through the baking time to ensure even baking.  Immediately turn the pastries out onto a sheet of parchment on a heatproof surface.  Serve warm. 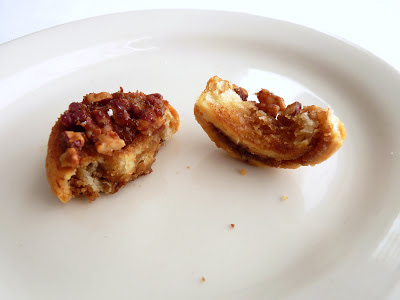 Posted by pastry studio at 7:52 AM

Email ThisBlogThis!Share to TwitterShare to FacebookShare to Pinterest
Labels: pastries

These look delish! I guess you figure by now we have abandoned all our good January intentions and are ready to start eating again! You, as always, are a temptress.

Have a good weekend. I'm going for a long walk now so I can eat these puppies on Sunday morning.

Hellooooo, Victoria! We have to have SOME fun in the new year!

I always use unsalted roasted or toasted almonds for more flavor. I usually buy almonds and other bulk nuts at Trader Joe's. The only time I've ever used raw almonds was for almond meal for use in French macarons at a bakery where I blasted out hundreds per week.

Great weekend to you as well.

Thanks for that response. It's especially helpful because the day may come that I try my hand at making macarons. (Although I recently noticed Laduree on Madison Avenue for the first time, even though it's been there for quite a while.)

Your blog, as always, is excellent. I continue to be amazed at your photography. It is really glorious. Your blog is the most beautiful blog of all!

Oh, thank you for your incredible support. I've been wringing my hands over the lack of sun for my photo sessions. But that is Mother Nature, so I must go with the flow. And I'm still having lots of fun with this whole thing so I shouldn't complain!

Laduree is quite the iconic French patisserie. Macarons are a bit difficult but with practice, it becomes a pretty interesting art form. The trick is in the folding of the egg whites and the final viscosity of the batter. And you get a certain rhythm in your wrist as you pipe them.

OK, I must go and look at my French pastry recipes now!

I can't wait to make these! Would you mind sharing some coffee making tricks such as type of bean and grind, and amount of coffee grinds to water ratio. I would greatly appreciate your advice. We are facing as our coffee maker no longer works.

Anonymous, here is some basic coffee brewing advice for you from Peet's:

Test and adjust the amount of coffee to your own personal preference. I like strong coffee! You can also Google coffee brewing tips and get lots more info about specifics.

How perfect! I am always itching for sticky buns in the morning but never want to go the all the work of making them.

Hi! I’m new follower of your blog and would like to invite you to join me at my weekly Clever Chicks Blog Hop:

I hope you can make it!

Kathy, welcome and thanks for sharing your blog link!