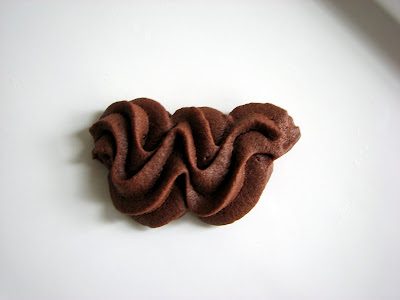 Pierre Hermé was trained in some of the best of the classic pastry kitchens of Europe, starting out as an apprentice to Gaston Lenôtre at the very young age of 14. Hermé has steadily built on those traditions over the years and nowadays he is mostly known for his big bold flavors and complex compositions. If you just glance at his cookbooks, especially the luscious The Patisserie of Pierre Hermé, you can see he is famous for his unending search for bright and contrasting textures and tastes and the beauty of his creations. So I was somewhat bowled over by the utter simplicity and delicacy of his recipe for Viennese Chocolate Sablés. To be sure, he learned the beauty of this lovely cookie while in service to Wittamer, the venerable Viennese pastry shop known for its dressed up mousse-laden sponge cakes, Bavarian creams and glimmering tarts. In his cookbook devoted entirely to the subject of chocolate, Hermé has added cocoa to the classic Wittamer recipe. Not a dose of heavy chocolate on the palate, it is instead a full sensation of dark earthy cocoa and the unmistakable power of butter transformed into an ultra delicate burst of fine crumbs in your mouth. A feather-light drift of snowy confectioner’s sugar adds to the velvety texture but allows the butter and cocoa to shine, an homage to the purity and simplicity of quality ingredients.

Be careful. These don’t survive any last minute packing for the road. But they are inordinately easy to consume on the premises. 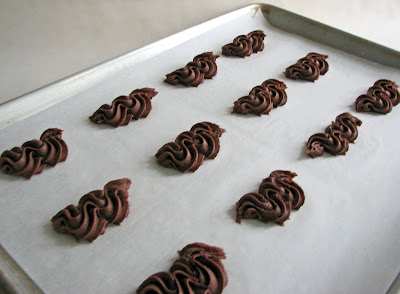 Bench notes:
- If you can find Valrhona cocoa powder, it’s put to its best use in a recipe like this one.
- Hermé pipes these in the classic “W” of Wittamer's. (I used Ateco #9825.) You can pipe your own design of course - just be sure to make them approximately the same size.
- I baked mine for 10 minutes. They won’t be hard and should not take on any color on the top or bottom. They’ll set up fairly quickly as soon as they are out of the oven.
- Hermé suggests dusting them with confectioner’s sugar. I don’t think they need it, but you may find it desirable.
- These will keep for up to a week packed delicately in a cookie tin. I think they are better the next day.
- I’ve included the metric weights, preferable for a recipe such as this. 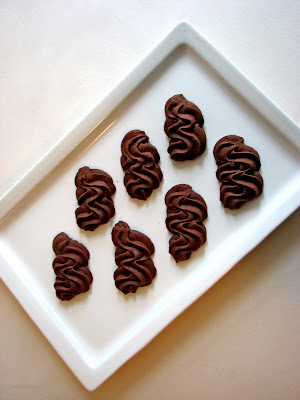 Spoon about half of the dough into the pastry bag and pipe cookies that are about 2” x 1 1/4”, spacing them 1” apart on the baking sheet. Repeat with remaining dough.

Bake for 10 to 12 minutes until they are just set but are not hard or browned.
Cool on a wire rack. 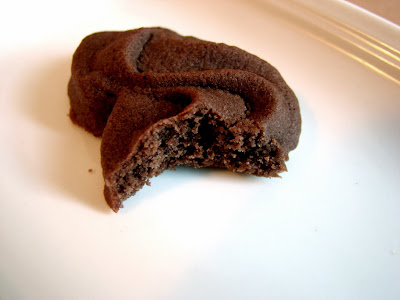 What a wonderful little treasure this cookie is, absolutely lovely! I looks like it would melt in your mouth, I need to make these!

Sables are my favorite, and these ones look supremely exquisite!

these must be so crumbly... delicious!

Oh, I could pop a dozen of those into my mouth right now!

These are just lovely. The design looks very nice. This would be a nice serving for our family gathering this weekend.

I made them. They turned out great and so delicious. Thanks for sharing the recipe.

You're very welcome! Glad you had a chance to enjoy these little gems.

hi, thanks for sharing. I am very keen in baking this sables. But I don't understand your recipes as mentioned "3 T light beaten egg whites @ room temperature (lightly beat 2 large egg whites and measure out 3 T)". I would appreciate if you could explain it. once again, thank you!

Hello Dorothy and thanks for your question.

The T stands for tablespoons, so this recipe calls for 3 tablespoons of egg white. Or 1 1/2 ounces or 43 grams if you have a scale. Since 1 egg white = 1 ounce, portion out 2 egg whites, beat them lightly and then measure out. I hope this helps. These cookies are really delicious!!

Thank you very much for your clear explanation.