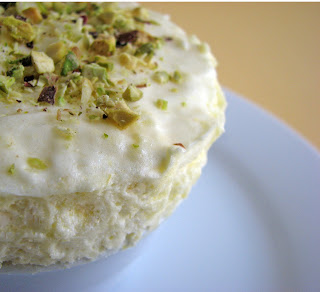 Time for something light and lemony. And what could be lighter and more lemony than a lemon soufflé? I really love hot soufflés for their texture and subtle deliciousness. But rather than having to fret about planning and preparing to serve a soufflé straight out of the oven, here is a cold lemon soufflé that can be prepared well ahead and simply pulled out of refrigeration and delivered to the table without interrupting the flow of lingering over that last bite and sip.

This preparation is not terribly complicated, but it does require you to be organized. The method is similar to a bavarois or Bavarian cream: you’ll need to act quickly once the base is prepared. The cream and the egg whites should be whipped and waiting to be folded in just as the base is starting to set up. And there will definitely be more than one bowl to wash, but that shouldn't stop you. This dessert is definitely worth the dishpan hands.

Sometimes you may have a craving for a bold and intense dessert. Other times you may wish for a whisper of a treat, one that will not clobber you over the head. This is that dessert. Simple, tart, tangy, light and lemony. 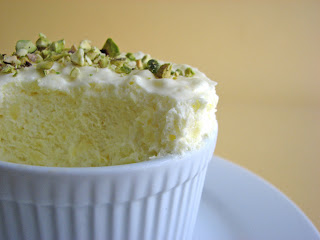 Bench notes:
- The soufflé achieves its lofty height with the assistance of a paper collar. Just cut a strip of parchment or waxed paper or foil a couple of inches longer than the circumference of the ramekin. Fold the strip in half lengthwise and secure it with tape. The collar lets you fill the dish above the rim, allowing this frozen dessert to have the same look as a traditional baked soufflé. You can also skip this part and simply fill the ramekins to the top and smooth over with a metal spatula.
- There are alternatives to the packets of gelatin that you find at the grocery. I prefer gelatin sheets that I've used in professional kitchens. They have no odor and are very easy to use. A packet of gelatin is 1 tablespoon, or the equivalent of four sheets of leaf gelatin or 1 T of agar agar. 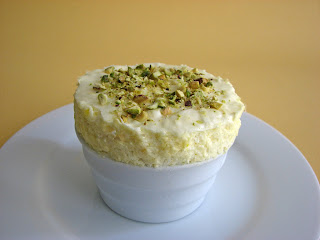 Fit four 1-cup ramekins with a paper collar if you want the soufflé to set up higher above the rim.

Whip heavy cream until soft peaks form. Set aside in refrigerator until needed.

Place the sugar and lemon zest in a food processor and blend until the zest has been finely ground. Combine lemon sugar with egg yolks and lemon juice in a mixer bowl. Place the mixer bowl over a simmering pan of water, stirring slowly and continuously until sugar is dissolved and mixture is hot. Beat on medium high until the mixture lightens, triples in volume and forms a thick ribbon when beaters are lifted. This will take about 10 minutes.

While lemon mixture is beating, sprinkle the gelatin over 1/4 C water to bloom. Heat over simmering water until the gelatin dissolves. When the egg yolk mixture ribbons properly, pour the liquefied gelatin into the egg yolk mixture and beat until combined. Nest this bowl in a larger bowl partially filled with ice water and stir gently until it begins to thicken, about 5 - 8 minutes.

When egg mixture has started to thicken, carefully fold in the whipped cream in thirds, then fold in the beaten egg whites. Scoop into the ramekins, smoothing tops. Refrigerate until firm, about 2 hours.

When ready to serve, garnish with pistachios if desired. 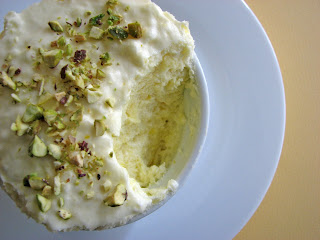 Posted by pastry studio at 2:43 PM

That light lemony souffle looks so good. I like the green pistachios on top.

Wow... I just found your blog and this looks amazing. Great photography too! Well done!

Hello, people! Thank you so much for your compliments. I can certainly say the same thing about your blogs. Amazing work by all. We are so lucky to have all this creativity to inspire each and every one of us!

One & the other
Mutual felicity
Cool Lemon Souffle

Hi there, The frozen souffle looks great. Have you tried making this with agar instead of gelatin? If so, what's the process and how did it turn out?